Home Entrepreneurship Cut the Stress Out of Your Commute

Cut the Stress Out of Your Commute

The working day is stressful enough without the added problem of your commute to and from the office every morning and night.

Unfortunately, many of the aspects of the modern commute are unavoidably hectic and uncomfortable. From traffic jams to rail delays, it seems that however you choose to get to work, you’re asking for trouble in one way or another.

For example, according to a recent Buzz Conferencing infographic, one in five passengers on the train have to stand during their journey because of overcrowding. Meanwhile, car commuters spend an average of nine working days a year stuck in traffic. 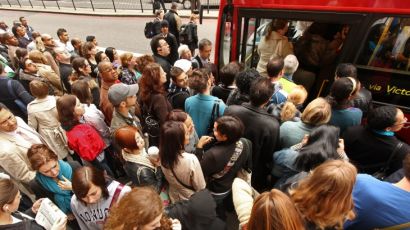 There are plenty of ways to make the twice-daily trip a much more bearable experience though and here are some suggestions to help you on your way.

While it may seem like an odd suggestion, dressing to reflect your environment can make a huge difference to levels of comfort during your journey.

This advice is especially relevant in the summer, when opting for looser clothing could save you a good hour or more of extreme discomfort on a crowded, stuffy carriage when the weather is getting warmer. While Transport for London has said that the London Underground will introduce air conditioning to the network by 2016, we’re a few years away from that just yet!

Although it may seem as though you are in the minority, if you refrain from playing with your smartphone or tablet on the way home, you could massively reduce feelings of stress that have built up over the day.

After staring at a computer screen for a long period of time, by disconnecting yourself from the digital world on the way home you are signalling that your time at work is over. Instead, use your spare time to reflect, read a newspaper or even just gaze out of the train window and the landscape flashes by.

Listening to some calming chill-out music as you leave the office can also have a calming effect and help you wind down.

Several studies have shown that listening to the right sort of music can also reduce anxiety levels, while classical and pop tunes can make you a more relaxed driver. It can also help you tune out all the hustle and bustle of the commute itself, allowing you to temporarily escape into your own world.

Cut the commute out altogether

Perhaps the most ideal solution, allowing staff to operate away from the workplace is an approach that more and more businesses are taking, thanks to the latest technology. Audio conferencing is the answer for many when it comes to keeping colleagues in touch with the office when they are based elsewhere, allowing employees to participate in meetings from the comfort of their own home.

One suggestion is to substitute one in five face-to-face meetings with a conference call, reducing the amount of time spent on the road.

It’s ideas like this that means the commute is no longer a daily necessity – something that’s surely worth celebrating!

Cut the Stress Out of Your Commute
0
FacebookTwitterPinterestLinkedinWhatsappEmail