Doing business in Australia: The World’s Most Untapped Market

The Australian consumer market is greatly affluent – more so than many people realize. Being close neighbors to China, China has predominantly been the one to benefit from this – particularly with a growing middle class of their own, meaning supply for such higher quality consumables are increasing too.

As we can see in the graph below, the weekly Australian disposable income is very large (in 1,000 persons), even for a developed economy. 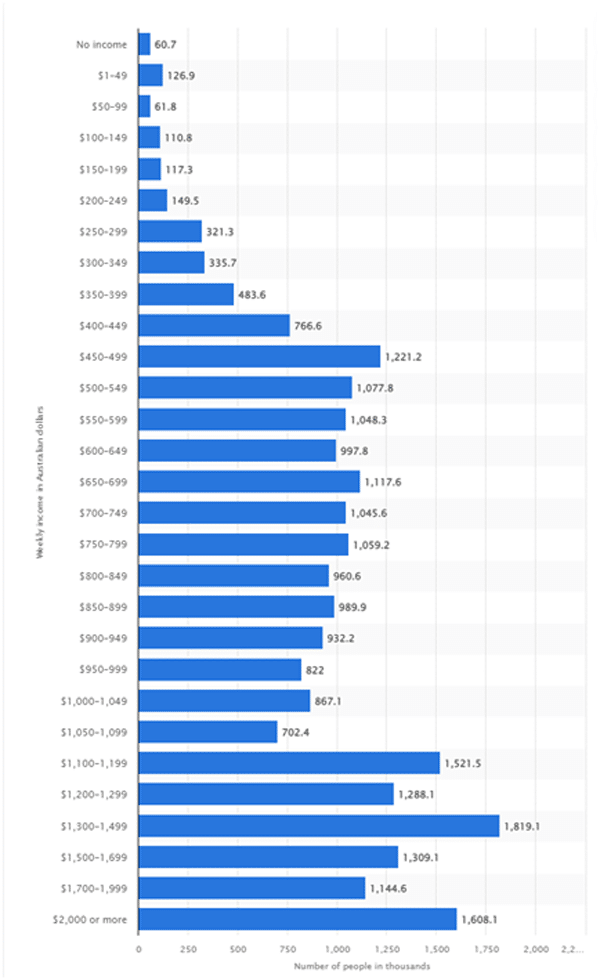 As a result, the consumer market in Australia is growing tremendously. There are serious obstacles in the way of Australian businesses, with ongoing authoritarian Coronavirus restrictions, but it’s presenting a good opportunity for exporters to exploit the Australian consumer market.

The difficulties of selling to Australian customers

Of course, a key difficulty when selling to Australia is its geographical proximity. It’s very far away from the US and Europe, which are their main political allies, with a great sea surrounding the country. Some countries will be charged an import tax, whilst others will not.

Generally, businesses opt for couriers such as MyPost Business, Allied Express, DHL, and BHF Couriers – but they’re not cheap. This forces some companies into drop shipping – sending products directly from the production location (i.e. China) to their neighbors, Australia. We don’t need to go into detail about the problems drop shipping presents, though, particularly when it comes to complying with Australian consumer rights, like refunds and warranties.

There are a tonne of consumer rights in Australia – and rightly so. These consumer guarantees can make it difficult when migrating a company to Australia, as there’s a lot to comply with.

It’s not just the domestic companies that must comply though, it applies to all goods brought into Australia with the exception of a few small quantity items (for personal use). This is something that businesses need to be aware of, taking a lot of time to research and potentially money to comply with.

On top of these rights, there’s also a substantial list of restricted and prohibited products. For example, if you’re selling food-related products, there may be issues – they’re strict on anything that could contaminate the country’s environment or agricultural industry. Goods containing cosmetics, inks, or plastics will need to register with the Government’s National Industrial Chemicals Notification and Assessment Scheme (NICNAS) which incurs registration fees.

Another difficulty when selling to Australians is the currency. Thankfully, the Australian Dollar isn’t exactly exotic, so it is a popular currency route that’s pretty liquid, but nevertheless, small businesses get stung with poor exchange rates and significant fixed fees.

In fact, Australian banks themselves are known for the high fees when sending money internationally, and this can also apply to receiving funds from abroad.

Generally, accepting AUD payments from PayPal will incur a ~3.5% exchange margin, though it depends on the businesses base currency. This could mean 3.5% of sales revenue is completely wiped out, before factoring in the extra shipping costs and regulations.

Selling to Australia can still be done, but it takes some significant work to help reduce these extra costs. Many of the above difficulties actually apply to Australian businesses themselves too, or surrounding neighboring countries, which makes the competitive landscape slightly more level.

In some sense, Australians are somewhat used to paying a lot for their shipping fees too, but that still doesn’t help to mitigate the currency situation, which has an outright solution.

The best way to take the headache away from pricey payment/transaction fees and currency discrepancies is to get an Australian dollar bank account. Of course, this is very difficult when you’re not living there, and in many cases, Australian banks cannot allow foreigners to open up an account.

However, what is possible is to open up an AUD bank account with a money transfer company or FX specialist. These platforms create virtual accounts (which is why it’s possible to do so) but will nevertheless have Australian bank details that can be used by Australians to pay into your multi-currency account.

This means that Australian customers can pay in Australian dollars. Not only will this avoid those nasty ~3.5% fees, but it means the business can exchange the money back into base currency whenever they like – with a 0.5% to 1% exchange margin instead. An Australian dollar bank account can cut down on thousands in wasted transaction fees every year.

Photo by Catarina Sousa from Pexels